All right, let’s say you just don’t care about women, or you don’t believe in sexism because, hey, you’ve never seen it, and you think people just can’t take a joke and are all probably just overreacting.

There were further problems with Dr. Shermer’s January 9 Convocation speech at the Skinner Memorial Chapel (again available to the public eventually at this link).

After the first pretty banal though condescending half of his speech in which Dr. Shermer pointed out that people believe ridiculous things for their own safety (the irony almost chokes me), Dr. Shermer then began to discuss religion and specifically Islam and specifically brought in the Charlie Hebdo attack.

Side note on Charlie Hebdo: go read the wonderful Jacob Canfield’s article in the Hooded Utilitarian. (Side side note: Some people seem to be reading victim blaming into Jacob’s article. I did not. I think his point, which is what I was trying to reflect in my post as well, is that the cartoons created in response to the attack rather than helping to heal or promoting the cause of free speech, are simply anti-Islamic with disastrous racial undertones. No one is saying that people should be killed for what they create or that the cartoonists were in anyway responsible for their own deaths. Dear God, no. But I also don’t think that people should be using this event as an excuse to publish further hate-filled cartoons. See below.)

Further side note: It’s tragic that people were murdered in France, and I don’t want to sound isolationist, but I can’t help but think that the discussion of Charlie Hebdo is a nice distraction from the continued racial injustice in the United States. See the #NAACPbombing movement. (Where is the backlash against all white men in response to the bombing??)  It’s a much easier narrative: in a different country; related to Islam, a religion we feel very comfortable railing against; related to free speech a subject we all love to rabidly protect without fully understanding its implications and complications. The Charlie Hebdo attack was incredibly sad and unnecessary, but so were the deaths of Michael Brown and Eric Garner. They are different situations in which the cost was human life, a price too high for any ideal or “mistake”, but I can’t help but wonder how happy people would be to talk about something happening in France if we didn’t have something we wanted to ignore in our own backyard. And where was the global “I am Garner” movement? Laura wonders.

So, back to Dr. Shermer’s talk in the Chapel this Friday. As I said, Dr. Shermer transitioned excitingly from ignoring the banner reading “We Remember” (in reference to the allegations of sexual assault. See Part 1), to talking about how, while all religions are inherently wrong, some (read here Islam) are more wrong than others. He then shared some of the terribly racist covers that have been circulating post Charlie, like this gem: 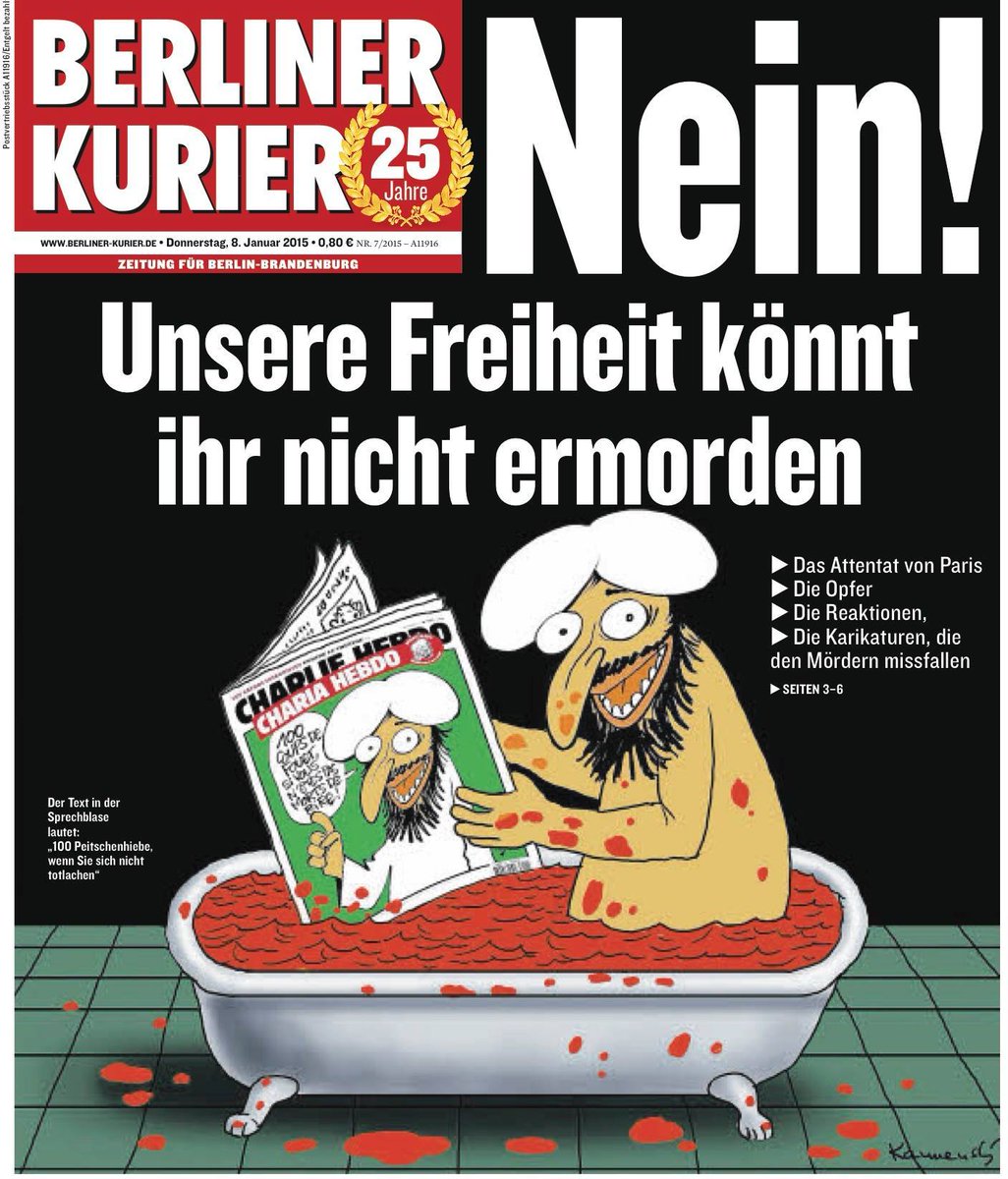 It reads: “You can’t murder our freedom”. I’ve never been more ashamed to speak German.

He showed us some statistics regarding how many Muslims world-wide believe in sharia and would like to see it codified. That’s fine, but he then equated believing in sharia with supporting murder and extremism. PLEASE SHOW ME THE STATISTICS OF THOSE IN THE UNITED STATES WHO BELIEVE THE BIBLE IS THE WORD OF GOD AND THAT IT SHOULD BE CODIFIED INTO LAW. This is part of a religion, believing in the given text as the word of God. If you did not believe this, you would not be part of said religion.

HOWEVER, BELIEVING IN YOUR OWN RELIGION DOES NOT AUTOMATICALLY MAKE YOU AN EXTREMIST, NOR DOES IT MEAN THAT YOU ARE IN SUPPORT OF MURDER.

If we want to get into violence supported by religion why don’t we look into the KKK, shall we? How many people of color were mutilated and executed in the name of Jesus Christ in our own country, in our own backyard? How likely is it that the NAACP bombing was motivated by a religious-minded white man? Why didn’t you talk about that, Dr. Shermer?

Dr. Shermer willfully participated in the continued Islamophobia that has held sway in this country since before 9/11 and which is still at play in France. On his twitter account (read for a bitter laugh that turns to incomprehensible cursing) he continued to defend his statements repeatedly questioning where were the Christians who committed such acts? Here are some, Dr. Shermer:

KKK: Perhaps you’ve heard of them. “Bringing a Message of Hope and Deliverance to White Christian America! A Message of Love NOT Hate!” Responsible for the death and mutilation of thousands of people of color since its creation in 1866.

Kataeb Party:  A right-wing, predominantly Christian group responsible for the Sabra and Shatila massacre, between 762 and 3,500 civilians murdered in 1982.

But that’s not the point. I’m not trying to say we should persecute Christians anymore than we should persecute Muslims. All religions have committed atrocities. People will use anything they can to motivate their inhuman actions. Singling out Islam as “the worst” religion in this regard, and then spreading the ignorant and downright fucking stupid comics that perpetuate racial stereotypes, is grossly inappropriate. This is not a matter of “political correctness” as Dr. Shermer seemed to think, but of continued Islamophobia and inherent xenophobia and racism. (Particularly look at the correlation between distrust in Muslims loyalty and belief in the military/police in the United States. Interesting.)

So if you weren’t convinced that allowing this man on our campus was a bad idea based solely on his previous treatment of women, then perhaps his current actions of stereotyping an entire religion during a time when they are already receiving backlash for the actions of a few extremists might convince you.

THE POINT IS DON’T FUCKING INVITE INSENSITIVE ALLEGED RAPISTS TO OUR CAMPUS.

Especially when there are so many other deserving people we could hear talk. Maybe some who aren’t fucking wealthy white men. There are more important things than notoriety. Like being a good person.